Summary:Magnetron sputtering for vacuum coater includes many types. Each has different working principles an...
Magnetron sputtering for vacuum coater includes many types. Each has different working principles and application objects. But there is one thing in common: the interaction between the magnetic field and the electrons makes the electrons spiral around the target surface, thereby increasing the probability of electrons hitting the argon gas to produce ions. The generated ions collide with the target surface under the action of the electric field to sputter the target material. In recent decades of development, everyone has gradually adopted permanent magnets, and rarely used coil magnets.
The target source is divided into balanced and unbalanced types. The balanced target source has a uniform coating, and the unbalanced target source has a strong bonding force between the coating film and the substrate. Balanced target sources are mostly used for semiconductor optical films, and unbalanced sources are mostly used for wearing decorative films.
Regardless of balance or unbalance, if the magnet is stationary, its magnetic field characteristics determine the general target utilization rate is less than 30%. In order to increase the utilization rate of the target material, a rotating magnetic field can be used. However, a rotating magnetic field requires a rotating mechanism, and the sputtering rate must be reduced. Rotating magnetic fields are mostly used for large or expensive targets. Such as semiconductor film sputtering. For small equipment and general industrial equipment, a stationary target source with a magnetic field is often used. 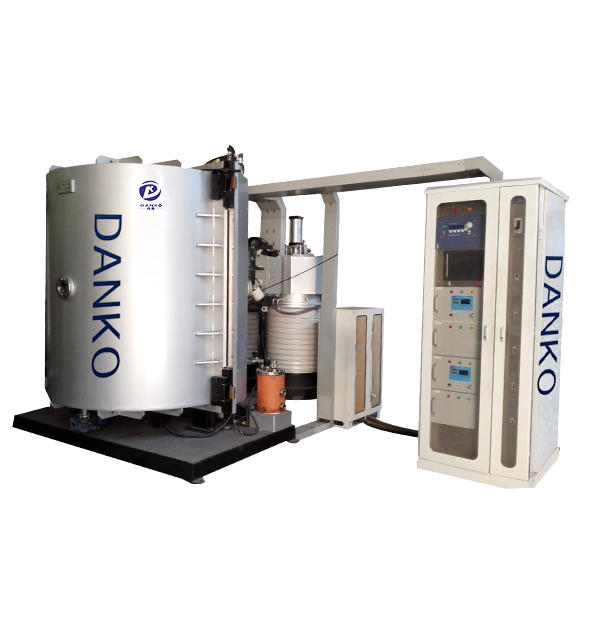 It is easy to sputter metals and alloys with a magnetron target source, and it is easy to ignite and sputter. This is because the target (cathode), plasma, and the vacuum chamber of the splashed parts can form a loop. But if the insulator such as ceramic is sputtered, the circuit is broken. So people use high-frequency power supplies and add strong capacitors to the loop. In this way, the target material becomes a capacitor in the insulating circuit. However, the high frequency magnetron sputtering power supply is expensive, the sputtering rate is very small, and the grounding technology is very complicated, so it is difficult to adopt on a large scale. To solve this problem, magnetron reactive sputtering was invented. That is, a metal target is used, and argon and reactive gases such as nitrogen or oxygen are added. When the metal target material hits the part due to energy conversion, it combines with the reaction gas to form nitride or oxide.
Magnetron reactive sputtering insulators seems easy, but the actual operation is difficult. The main problem is that the reaction not only occurs on the surface of the part, but also on the anode, the surface of the vacuum chamber, and the surface of the target source. This will cause fire extinguishing, arcing of the target source and the surface of the workpiece, etc. The twin target source technology invented by Leybold in Germany solves this problem well. The principle is that a pair of target sources are mutually anode and cathode to eliminate oxidation or nitridation on the anode surface.
Cooling is necessary for all sources (magnetron, multi-arc, ions), because a large part of the energy is converted into heat. If there is no cooling or insufficient cooling, this heat will make the target source temperature more than 1,000 degrees and melt the entire target source .
A magnetron device is often very expensive, but it is easy to spend money on other equipment such as vacuum pump, MFC, and film thickness measurement without ignoring the target source. Even the best magnetron sputtering equipment without a good target source is like drawing a dragon without finishing the eye.
PREV：What is painting equipment?NEXT：What is the type and scope of vacuum coating machine？